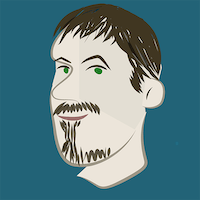 John Holbo is an Associate Professor of Philosophy at the National University of Singapore (NUS), with a Ph.D. in Philosophy from the University of California, Berkeley, where he dissertated on Wittgenstein's Tractatus Logico-Philosophicus.

With his wife, Belle Waring, he is the author of Reason and Persuasion: Three Dialogues By Plato (Pearson: 2010). He is currently working on projects in aesthetics (pictoriality and literature) and political philosophy (liberalism and conservatism). He learned to draw (badly!) so he could make better PowerPoint presentations about Plato. As an indirect result, he is the author of Squid & Owl (Comixology, 2013), if you are curious.

Reason and Persuasion: Thinking Through Three Dialogues By Plato