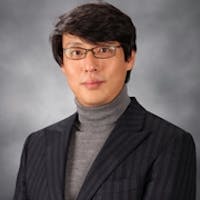 Kwang Soon Kim received the B.S. (summa cum laude), M.S.E., and Ph.D. degrees in electrical engineering from the Korea Advanced Institute of Science and Technology, Daejeon, South Korea, in 1994, 1996, and 1999, respectively. From 1999 to 2000, he was with the Department of Electrical and Computer Engineering, University of California at San Diego, La Jolla, CA, USA, as a Post-Doctoral Researcher. From 2000 to 2004, he was a Senior Member of the research staff with the Mobile Telecommunication Research Laboratory, Electronics and Telecommunication Research Institute, Daejeon. Since 2004, he has been a Professor with the Department of Electrical and Electronic Engineering, Yonsei University, Seoul. His research interests include signal processing, communication theory, information theory, and stochastic geometry applied to wireless heterogeneous cellular networks, wireless local area networks, wireless D2D networks and wireless ad doc networks, and are recently focused on the new radio access technologies for 5G. Prof. Kim served as an Editor of the Journal of the Korean Institute of Communications and Information Sciences (KICS) from 2006-2012, as an Editor-in-Chief of the Journal of KICS since 2013, as an Editor of the Journal of Communications and Networks (JCN) since 2008, and as an Editor of the IEEE TRANSACTIONS ON WIRELESS COMMUNICATIONS 2009- 2014. He received the Post-Doctoral Fellowship from Korea Science and Engineering Foundation in 1999. He received the Outstanding Researcher Award from Electronics and Telecommunication Research Institute (ETRI) in 2002, the Jack Neubauer Memorial Award (Best System Paper Award, the IEEE TRANSACTIONS ON VEHICULAR TECHNOLOGY) from the IEEE Vehicular Technology Society in 2008, and the LG R&D Award: IndustryAcademic Cooperation Prize, LG Electronics, 2013.

Wireless Communications for Everybody