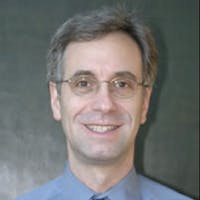 Louis A. Bloomfield is Professor of Physics at the University of Virginia, where he has been teaching since 1985. Bloomfield grew up taking everything apart and, with the notable exception of one recalcitrant mechanical clock, he managed to get them all back together again (or at least that's what he remembers). He also survived numerous electrical shocks and chemical accidents in his youth, not all of which were unexpected. When he arrived at Amherst College, tinkering with things wasn't offered as a major, so he chose the closest available option: he majored in physics. Bloomfield received his B.A. in 1979 summa cum laude and his Ph.D. in physics from Stanford University in 1983. He was a postdoctoral fellow at AT&T Bell Laboratories until 1985, when he joined the faculty of the University of Virginia as an Assistant Professor of Physics. He has been there ever since. Bloomfield is the recipient of numerous awards for his research in atomic, condensed matter, and optical physics, including the Apker Award of the American Physical Society, a Presidential Young Investigator Award of the National Science Foundation, a Young Investigator Award of the Office of Naval Research, and an Alfred P. Sloan Fellowship, and he is a Fellow of the American Physical Society. In 1991, Bloomfield decided to try teaching physics the way he originally learned physics: in the context of everyday things. He created a course called How Things Work and taught it to 92 students at the University of Virginia its first semester. He was hooked and evidently so were the students, because 261 of them took the course its second semester. Since then, Bloomfield has taught physics to nearly ten thousand non-science students at the University and received both a 1998 State of Virginia Outstanding Faculty Award and the 2001 Pegram Medal of the Southeastern Section of the American Physical Society for that teaching. His course became an innovative introductory textbook entitled How Things Work: The Physics of Everyday Life, 5th Edition (Wiley, 2013) and that textbook became a more comprehensive trade book entitled How Everything Works: Making Physics Out of the Ordinary (Wiley, 2008). In addition to his books, Bloomfield is the author of more than 100 publications in the fields of atomic clusters, autoionizing states, high-resolution laser spectroscopy, nonlinear optics, computer science, and general science literacy. Bloomfield works extensively with professional societies and the media to explain physics to the general public and has appeared frequently on television and radio. He co-hosted the television series Some Assembly Required on the Discovery Channel (2007-2008) and appeared frequently in Known Universe on the National Geographic Channel (2009). He is appearing in his 5th season of "Forces of Hockey" (2010-2014) for the Washington Capitals "Caps Red Line" program and has won 3 regional Emmy awards. Although he enjoys the challenge of explaining physics on the small screen, he is well aware that he is not an actor and that he merely plays one on television. Bloomfield's years of experimenting with everything he can get his hands on, and reading about those he can't, have made him something rare in modern day science: a generalist. More specifically, he knows enough to be dangerous in a broad swath of the physical sciences and even some of the life sciences. That background has allowed him to serve frequently as a science consultant and as an expert witness in matters that require a broad understanding of physics and scientific issues. Although Bloomfield struggles to keep his research, teaching, and service activities from consuming every available second, he has too much fun with all of them to stop.