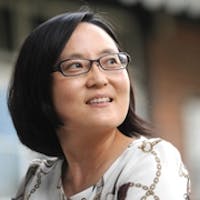 KIM, Hyun Mee Hyun Mee Kim is professor of the Department of Cultural Anthropology, Yonsei University, South Korea. Her research interests include political economy of gender, globalization and migration, feminist cultural theories, Inter-Asian Cultural Studies, and human ecology. She has written articles on diverse migrants coming to South Korea including marriage migrants, asylum seekers and economic migrants. Her current research is on the formation of the therapeutic self and the emergence of Young city meditators in South Korea. She is the author of Cultural Translation in a Global Era (2005) and We Always Leave Home: Becoming Migrants in South Korea (2014), and co-edited Intimate Enemy: How Neoliberalism Has Become Our Everyday Lives (2010), Gender and Society (2014) in Korean, and Multiculturalism in East Asia: A Transnational Exploration of Japan, South Korea and Taiwan (Asian Cultural Studies: Transnational and Dialogic Approaches) (2016) and more. She was a Committee Member for the Division of Human Rights for Foreigners, National Human Rights Commission of Korea (2008-2010) and is a member of the Forum on Human Rights for Migrant Women in South Korea.