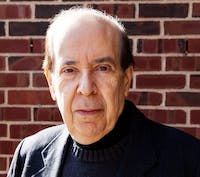 Emeritus Professor of Practice in City and Regional Planning

Jonathan Barnett is one of the pioneers of the modern practice of city design, a discipline firmly grounded in current political, social and economic realities.

As the director of the graduate urban design program at the University of Pennsylvania, before that as the director of the Graduate Program in Urban Design at the City College of New York, and as a visiting professor, critic or lecturer at many other universities, Jonathan Barnett has helped educate more than a generation of city designers.

He worked in the reform administration of Mayor John Lindsay when New York City first had an institutional commitment to city design. His account of innovations created in New York, Urban Design as Public Policy, was a strong influence in establishing urban design as a necessary element of local government and in making city design a well-recognized profession.

Jonathan Barnett has written many books, book chapters, and articles about city design. In his most recent book, City Design: Modernist, Traditional, Green, and Systems Perspectives, Barnett explores the history and current practice of the four most important ways of designing cities, and suggests a fifth way which draws on all four approaches.

Jonathan Barnett has also developed his own extensive consulting practice as a city-designer, with long-term consulting relationships with the cities of Charleston, S.C., Cleveland, Kansas City, Nashville, Norfolk, Miami, Omaha, and Pittsburgh, and with the cities of Xiamen and Tianjin in China. He has also been the urban design advisor for two planned communities in Cambodia, and for several large-scale projects in Korea,

Currently he is interested in projects that involve controlling growth at the suburban fringe and in redeveloping by-passed areas in the older parts of metropolitan regions, and has worked on growth management plans for suburban communities in Missouri, Wisconsin, and New York State, and on the redesign of several former railway yards and military bases.

With his students at the University of Pennsylvania, Jonathan Barnett has prepared growth management studies for central Florida, done research into the potential effects of sea-level rise in the Delaware River Basin and the New Jersey Shore, and has demonstrated methods of incorporating Geographic Information Systems into development regulations in Lancaster County, Pennsylvania.