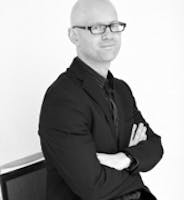 Director of Undergraduate Studies in Architecture

David Goodman is the Director of the Bachelor in Architecture. He received his Masters Degree in Architecture from the Harvard University Graduate School of Design, and completed degrees with honors in Government and in History of Architecture and Urbanism from Cornell University. He is co-author of the book An Introduction to Architecture Theory: 1968 to the Present, and his work has also appeared in the journal Log, in the anthology Chicago Architecture: Histories, Revisions, Alternatives, and in the book Walter Netsch: A Critical Appreciation and Sourecebook. Before founding his firm R+D Studio, he worked in the studio of Rafael Moneo in Madrid and for David Woodhouse Architects and Nagle Hartray Architects in Chicago. He has taught architecture at the Illinois Institute of Technology (IIT) in Chicago, Harvard University Graduate School of Design, and at the Boston Architectural College. The work of R+D Studio has been featured in the Burnham 2.0 Exhibition at the Chicago History Museum, and the office was recently awarded second prize in the national competition for the Reconquista Civic Center in Argentina.