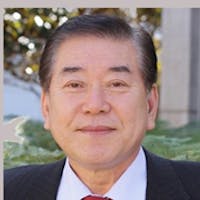 Chung-in Moon is a professor of political science at Yonsei University and Editor-in-Chief of Global Asia, a quarterly magazine in English. He is also Director of the Kim Dae-jung Presidential Library. He served as Dean of Yonsei’s Graduate School of International Studies. He was also Chairman of the Presidential Committee on Northeast Asian Cooperation Initiative, a cabinet-level post, and Ambassador for International Security Affairs at the Ministry of Foreign Affairs and Trade, the Republic of Korea. He taught at Williams College, University of Kentucky, Duke University, and UCSD. He also held a visiting professorship at Keio University and Beijing University. He has published over 40 books and 230 articles in edited volumes and such scholarly journals as World Politics, International Studies Quarterly, World Development, Journal of Asian Studies, and Security Dialogue. His recent publications include Understanding Japan's Strategic Mind (in Korean 2013, in Chinese in 2015), The Sunshine Policy-In Defense of Engagement as a Path to Peace in Korea (2012), and China's Rise and Grand Strategy (in Korean 2010 and Chinese in 2012). He attended the 1st and 2nd Pyongyang Korean summit as a special delegate. He is the recipient of Public Policy Scholar Award (the Woodrow Wilson International Center in Washington, D.C.), the Lixian Scholar Award (Beijing University), and the Pacific Leadership Fellowship (UCSD). He served as Vice President of the International Studies Association (ISA) of North America and president of the Korea Peace Research Association. He is a member of ASEAN Regional Forum-Eminent and Expert Persons (ARF-EEPs) representing South Korea and served as co-chair of the first and second AFR-EEPs meetings in June 2006 and February 2007. His book Grand Strategy of China's Rise (Beijing, World Affairs Press, 2011) won the award of 'one of the best imported books in year 2012' by the Chinese Publishers' Association.