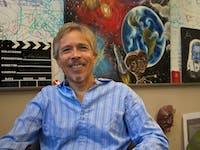 Chris Impey is a University Distinguished Professor of Astronomy and Associate Dean of the College of Science at the University of Arizona. He has over 180 refereed publications and 70 conference proceedings, and his work has been supported by $20 million in grants from NASA and the NSF. As a professor, he has won eleven teaching awards, and has been heavily involved in curriculum and instructional technology development. Impey is a past Vice President of the American Astronomical Society. He has also been an NSF Distinguished Teaching Scholar, a Phi Beta Kappa Visiting Scholar, and the Carnegie Council on Teaching’s Arizona Professor of the Year. He co-chaired the Education and Public Outreach Study Group for the recent Decadal Survey of the National Academy of Sciences. In 2009, he was elected a Fellow of the American Association for the Advancement of Science, and in 2014 he was selected as a Howard Hughes Medical Institute Professor. He has written eight popular science books, and a novel

Chris Impey aims to convey the excitement of astronomy in as many ways as possible to a large public audience. He gives 20 public talks a year, to audiences as large as 3500 and as varied as NASA engineers, first-graders, and Buddhist monks. He has written over forty popular articles on cosmology and astrobiology and authored two introductory textbooks. His has published six popular science books: The Living Cosmos (2007, Random House), How It Ends (2010, Norton), How It Began (2012, Norton), Talking About Life (2010, Cambridge), Dreams of Other Worlds (2013, Princeton), and Humble Before the Void (2014, Tempeton), and has two more in preparation. His first novel, Shadow World, was published in 2013. His Teach Astronomy web site gets over 5000 visitors a week, and his YouTube lectures and videos have over half a million views.

Knowing the Universe: History and Philosophy of Astronomy