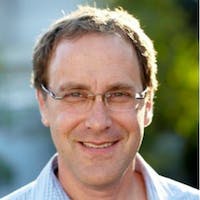 Daniel Chamovitz grew up in Aliquippa, Pennsylvania, and studied at both Columbia University and the Hebrew University of Jerusalem, where he received his Ph.D. in Genetics. From 1993 to 1996 he carried out postdoctoral research at Yale University before accepting a faculty position at Tel Aviv University where he was recently appointed Dean of the George. S. Wise Faculty of Life Sciences. In 2002, Prof. Chamovitz was a visiting scientist at the Fred Hutchinson Cancer Research Center in Seattle. He is currently the Director of the Manna Center for Plant Biosciences at Tel Aviv University. Chamovitz's scientific career has been characterized by novel and field-defining research: As a Ph.D. student in the lab of Joseph Hirschberg he was among the first to clone a gene involved in the biosysnthesis of beta-carotene. As a postdoctoral fellow in the lab of Xing-Wang Deng at Yale University, he discovered the COP9 Signalosome protein complex that was proposed then to be a master regulator of plant development. Later, Prof. Chamovitz's lab was the first to show that the COP9 Signalosome is also essential for development of animals. His lab in Tel Aviv has been spearheading the study of this important protein complex and has shown that it is likely involved in a number of human diseases including cancer. Prof. Chamovitz is among the most prominent researchers in this field and is often invited to give lectures at leading universities worldwide. Currently Chamovitz is developed and was the founding director of the new Program in Food Security and Safety at Tel Aviv University, and does pro bono consultation for governmental agencies on issues concerning Food Security. Daniel Chamovitz has published numerous peer reviewed original research articles and is on the editorial boards of several scientific journals. He is also member of the Faculty of 1000, Biology. Chamovitz is a sought-after speaker and science commentator. He has been interviewed in newspapers and magazines around the world such as The Boston Globe, Scientific American, Ha'aretz (the daily paper of Israel), and Macleans, and also on BBC, NPR, and Australian Public Radio, to name a few, and has appeared on television news shows in Israel. He has given popular talks at venues such as the California Academy of Sciences, Harvard Arboretum and Seattle Town Hall. When not overseeing the research in his lab, Daniel Chamovitz is passionate about teaching, and especially in developing a modern undergraduate curriculum for plant sciences. He has been awarded outstanding lecturer at Tel Aviv University several times. He also volunteers as a teacher in a local junior high school, engages high school students about science careers, and lectures to groups about the role of Plant Biology in feeding a growing world. He has also been known to show up at obscure bars and clubs with a guitar in hand. Danny lives in Hod Hasharon with his wife, three kids, dog and cat.

Understanding Plants - Part I: What a Plant Knows